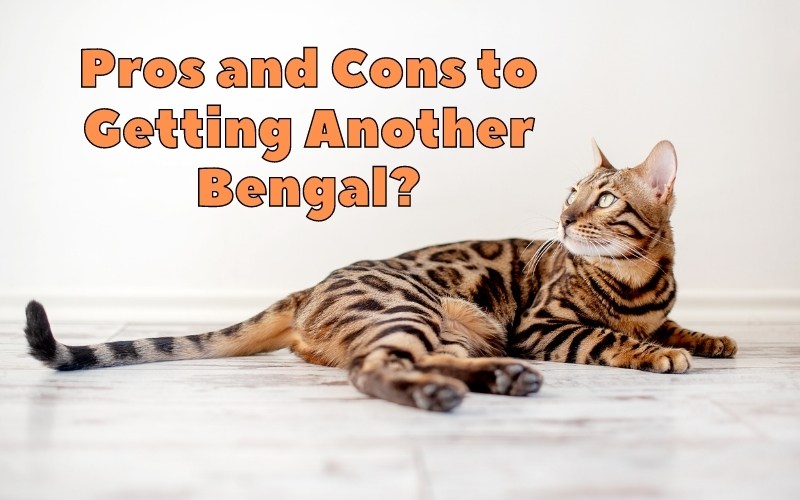 Are you debating whether or not to get a second Bengal? Then you should be aware of both the pros and cons.

Two Bengals will exercise more, keep each other entertained, and help one another learn faster. However, a pair of Bengals also means double the noise and more litter box issues; moreover, it might take your cats up to a year to develop an amicable relationship.

Pros and Cons of Getting Another Bengal?

The biggest pro of having two Bengals is the fact that the kitties will be able to keep each other entertained. As a result, you’ll have healthier and happier cats.

However, there are also a few cons that you would have to consider:

Do Bengal Cats Get Jealous?

If you’re planning on adopting another Bengal, you must divide your attention equally between the two. That might be challenging as, naturally, you would want to be a little more with the new kitty so that it gets acclimated to the new environment faster.

If your Bengal ever feels like it’s being left out, it will experience a jealous-like emotion. Divide your time intelligently, otherwise, one of the cats might start misbehaving.

Bengals can get into fights if they feel like the integrity of their territory is being violated. These kitties can also be more aggressive if they haven’t been spayed or neutered, so this is something that you should do.

Other than that, Bengals are no more likely to get into a fight than any other cat. When playing with each other, one of the kitties would tell the other one when to stop, if the play had gone too far; so, overall, you don’t have anything to worry about.

What Are the Cons of Owning a Bengal Cat?

One of the biggest cons of owning a Bengal is the fact that this cat needs a lot of attention and playtime. Getting a second kitty would make life a lot easier for you in this particular sense.

However, there are a few other disadvantages of owning a Bengal that can potentially double, if you decide to adopt another feline friend:

Should I Get a Second Bengal Cat?

Bengal cats tend to do better in pairs for the following reasons:

Even though cats are considered to be solitary creatures, the truth is that the majority of them enjoy being around people and other pets. Especially, the Bengals.

These kitties don’t tolerate solitude well. If left alone for too long, a Bengal might start to suffer from anxiety and depression.

Two Bengals with the same energy level usually do a lot better than one single kitty.

Do Bengal Cats Get Along?

Even though Bengals do look like wild cats, they do not behave that way. Yes, they can be extremely energetic, but they are generally friendly and affectionate.

How well the two cats are going to would depend a lot on…you.

You would have to make sure that the kitties were introduced properly, that they have separate bowls, and that you can give enough attention to both of them.

Is It Too Late to Get a Second Cat?

Adult cats are not as good at accepting changes as kittens, but it is extremely rare for a kitty to reject another cat altogether. If you already have a grown-up cat, you would simply have to spend a bit more time making sure that the two are getting along well.

Will My Cat Hate Me If I Get Another Cat?

Your Bengal wouldn’t hate you as long as you continue to take care of it as you did before.

Is Having 3 Cats Harder Than 2?

You should adopt a third kitty only if you are sure that you’ll be able to take proper care of all the cats. Three kitties mean more food, more litter, and more trips to the vet.

Some families decide not to adopt more cats than half the number of rooms in the house, to make sure that everyone has enough space.

How Do You Introduce a Bengal Cat to Another Cat?

The importance of a proper introduction can’t be overestimated. In general, experts recommend allowing the kitties to get used to the smell of each other before actually meeting face-to-face.

What Is the Best Gender Mix When Buying Two Kittens?

Two males are considered to be the best choice, while two females – are the ‘worst’.

With that being said, the personality of the cats is what matters, not the gender (as long as both of the kitties are spayed or neutered, of course).

A female cat can spray. It can be either a territorial behavior or a stress reaction.

The adoption of a second kitty can trigger spraying in female cats (even neutered kitties might still be able to do that).

How Do You Stop Bengal Cats from Fighting?

Jumping in to separate the cats can be dangerous, so all you can do is redirect the cats’ attention. You can make a noise with their favorite toy, for example.

Read: What Are the Difficulties of Raising a Bengal Cat?

When Should You Give Up on Cats to Get Along?

Do bear in mind that it can take your cats up to a year to develop an amicable relationship. During this time, you have to give the kitties their individual space, keep stress levels low, and stick to a routine.

You can also try reintroducing the cats once again.