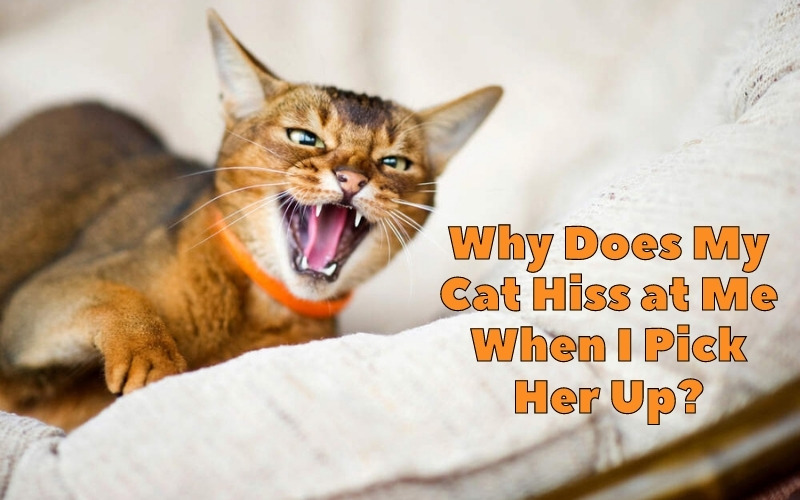 Sometimes, you might feel the urge to pick up your fluffy ball and kiss its cute head. But it may not always be the best idea, especially, if your kitty starts hissing.

A cat can hiss at you when you pick it up as a warning – it may be stressed out or in pain. The cat might also simply be annoyed by you, so make sure to give it some space when it’s not in the mood.

Why Does My Cat Hiss at Me When I Pick Her Up?

In the absolute majority of cases, hissing doesn’t mean anything good. Here is what exactly the hissing sound can mean:

Read: Can Savannah Cats Be Walked?

Why Does My Cat Growl and Hiss When I Pick Her Up?

If a cat is annoyed by physical contact, it might start to growl and even hiss. Simply leave the kitty alone for some time.

Why Is My Cat Suddenly Hissing When I Pick Him Up?

Hissing in cats is not about showing aggression. It’s a defensive mechanism and cats tend to use it when they are scared.

You might have come up to your kitty at the wrong moment. Perhaps, the little guy was already very nervous about something or it was experiencing discomfort in its tummy.

Why Does My Cat Get Aggressive When I Pick Her Up?

If a cat is feeling threatened, it will run away. However, if you are holding the fluffy ball, it will realize that all the escape routes are blocked, and the cat will start showing aggression.

The kitty might bite or scratch you in self-defense.

How the cat is going to handle you holding it will mostly depend on how you approached the kitty.

Approach the pet in a way that does not scare or surprise it, extend your finger towards the cat to greet the little guy, and only then pick the animal up (don’t forget to support the whole body, so that the kitty feels safe and secure).

Read: How Badly Do Cats Shed?

Why Does My Cat Hiss at Me When Playing?

Cats do not hiss when they are truly having fun. The sound is a clear signal that the pet no longer feels comfortable.

Kitties can start hissing when another cat (or a human) is playing way too rough with them. It’s their way of saying ‘don’t do that again’.

Why Do Cats Hiss at Other Cats?

Why Is My Cat Hissing and Growling at Me?

The chances are high that the cat is feeling threatened, annoyed, or crowded. It doesn’t want to be approached at this moment and simply wants to be left alone in a safe space.

The hissing and growling usually happen when there are small children in the house that don’t know when to leave the cat alone.

Cats can also exhibit such behavior if they have been hurt by people in the past.

Read: Why Is My Cat’s Hair Falling Out in Clumps?

Why Is My Cat Hissing at Me and Attacking Me?

Even if you have always been an amazing owner, no one is safe from sudden aggression in cats.

Your cat might start hissing at you and even attack you if it is very scared, if it’s suffering from a medical condition, if it’s defending its territory, or if its aggression has been redirected (the cat is already in a hyper-aroused state due to an external stimulus and then you show up).

Here are the signs of an aggressive cat:

Read: Why Is My Cat Throwing Up but Acting Normal?

My Cat Hissed at Me for the First Time

When a cat hisses, it is feeling provoked, threatened, insecure, mistreated, uncomfortable, or pressured in some way.

Try to remember exactly what you did that made your kitty act like that. You might have accidentally hurt the cat, tried to trim its nails, used the vacuum, and so on.

Hissing doesn’t mean that the cat is aggressive, there is just something in its surrounding that is making it feel uncomfortable. The sound might not be directed towards you – new objects or even smells can trigger such behavior.

Cat Hissing at Me After Moving

When cats find themselves in an unfamiliar situation/place or next to an unfamiliar animal, they might hiss – that is completely normal.

Give the kitty some time to get used to the new house and try to fill the space with some objects and smells that it already knows.

Why Is My Female Cat Hissing at Me?

A female and a male cat can hiss at each other when they’re looking for mates.

Mothers can get very protective of their kittens, and they might start hissing whenever someone comes close to them.

Read: Why Does My Cat Chew on Everything?

What to Do If Your Cat Hisses at You?

Should I Hiss Back at My Cat?

You shouldn’t hiss back at your pet. They might perceive this sound as a threat and become even more scared.

Instead of trying to discipline the kitty, try figuring out what exactly is making the little guy produce the sound.

Should I Hiss at My Cat When He Bites?

Hissing at your cat is only going to confuse it. You’re not a cat and you won’t be able to effectively communicate.

Will My Cat Ever Stop Hissing at Me?

The key to success is patience.

Gradually expose the cat to what it is scared of (you) and simultaneously give the little guy treats.

How Long Do Cats Remember Abuse?

A cat’s short-term memory lasts for 16 hours. So, if you accidentally stepped on the fluffy ball’s tail and then apologized, it will forget about the incident the next day.

Do bear in mind, however, that cats will remember repeated mistreatment for the rest of their lives.